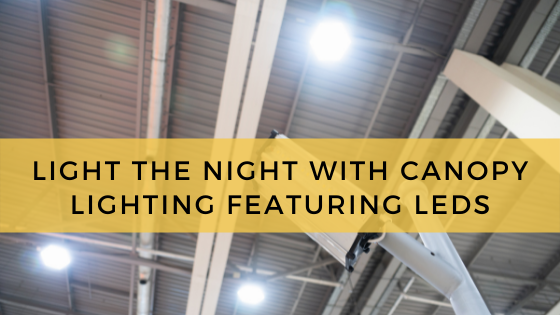 LED canopy lighting offers everything property owners need in a fixture. It is intense, energy efficient, reliable and long lasting, beating out long time options like HIDs and fluorescents in every way. It won’t be long before LEDs are the first choice in canopy lighting, and lighting experts are so impressed with the technology that many are now recommending it for a wide range of applications. The time has never been better for property owners to consider the benefits of LED fixtures.

What Is Canopy Lighting Used For?

Canopy lighting can be installed on residential properties, but it is usually found in front of businesses or in areas that are frequented by people or vehicles. They are always installed in areas that are likely to be active at night, like over a gas station or warehouse. Vertical lighting capabilities, lighting intensity, low operating and maintenance costs and reliability are all essential qualities to have in canopy lighting.

Like the term suggests, canopy lighting is installed directly above the target area offering an intense pool of illumination to ensure visibility and safety. Although canopy lighting can come in pendant, recessed or surface mount forms it is always placed on the underside of an overhang or soffit.

There are numerous applications of canopy lighting. In addition to gas stations, covered walkways, garages, warehouses and industrial facilities, product showrooms are also ideal spots for these fixtures.

Why Should Property Owners Update Their Canopy Lighting?

High intensity discharge, or HID technology was the canopy lighting option of choice for decades, along with fluorescent fixtures. This is a quickly changing trend though as property owners are realizing a boost in savings and performance by switching to LED fixtures. LED technology has replaced HID, fluorescent and other fixtures in many applications including canopy lighting applications.

Why has LED become a compelling choice for property owners? There are several reasons, including:

1. Low energy costs – Canopy lighting must be on for hours at a time, and in some settings it’s better to keep it on even when no one is taking advantage of it. For example, gas stations will keep their fixtures on from sundown to sunrise, because it encourages people to stop and patronize the business. In this instance, canopy lighting provides that sense of comfort and safety that people look for at night.

Low energy and maintenance costs are essential, and LED is far superior to all other technologies in both respects. The advantage is particularly noticeable when comparing LED and HID technology. The important metric here is the watt-to-lumen ratio. The greater the number of lumens per watt, the more efficient it is at converting energy to light.

LED fixtures regularly achieve ratios in excess of 100 lumens per watt, which is impressive. HID manufacturers may advertise similar ratios, but the listed watt-to-lumen number is often way off once the HID fixture is put in practice. That’s because HID fixtures tend to radiate in all directions, so only some of those lumens make it to the ground. Reflectors can offset this, but reflectors are heavy and are not 100 percent efficient. LED, by contrast, does not radiate but is naturally directional. This makes it easier to direct all of the LED’s output toward the ground and achieve a brighter result.

Further, HID lamps degrade faster in performance compared to LED. It’s common to see somewhere close to a 20 percent output reduction after the HID fixture has operated for about 8,000 hours. At this mark, LED fixtures will still be operating near peak output levels. If the lights are kept on for 12 hours a day, it will only take a couple years before the HID fixtures are noticeably dimmer than LED lights with the same watt-to-lumen ratio.

LEDs can go for years without being addressed, while HIDs may need to be switched out two or three times during that span. Also, HID fixtures have to be regulated with an onboard ballast and that has to be replaced separately adding to maintenance expenditures. The cost advantage here is clearly in LED’s favor.

3. Controllability – LEDs are built on top of solid state circuitry, while HIDs and fluorescent lights use reactive gases to output illumination. Solid state circuits are far easier to control, responding to the same electrical impulses that a computer utilizes. This added controllability gives LEDs a lot more utility in a few ways.

For instance, LED canopy lighting switches on instantly and does not need to be warmed up even in temperatures as low as -30 degrees Fahrenheit. Consider HIDs, which need several minutes to reach full intensity. LEDs also do not flicker and can be aimed with greater precision than HIDs. The result is more consistent, more even and more comfortable lighting.

Most LED canopy lighting can be dimmed when necessary, and dimmers can be tied to occupancy controls so intensity drops slightly when no one is around. The drop off is minor and as soon as someone enters the area the lights return to full intensity immediately. Occupancy controls and dimmers, though, ensure operating costs are kept to a minimum. They also extend the fixture’s life, offering more performance out of every fixture.

Canopy lighting pushes back the darkness and provides a sense of safety. It’s a must-have for businesses that remain open around the clock, so property owners should carefully consider their lighting options. LED fixtures are the superior option over HIDs, fluorescents and other technologies, and aren’t just the future of canopy lighting, but the present as well.