How Can We Help You Today?
(281) 972-5006
Where Lighting Ideas Turn Into Real Lighting Solutions!
Login Register
MENUMENU
LED SpotCommercial LightingSeven Reasons To Switch To LED Lighting 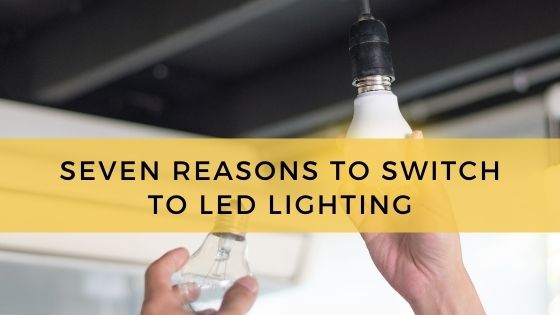 Seven Reasons Your Organization Should Switch to LED Lighting

LED lighting has gone from a niche product to a market favorite in just 10 years, and there’s no sign that this trend is slowing down. According to the International Energy Agency, 2021 marked the first year that LED technology was present in more than half of major lighting markets.

Residential, commercial or industrial – LED lighting is a frontline choice for a variety of applications. The question is, why have LEDs captured so much of the market so quickly? There are lots of reasons, but here are seven of the most prominent:

Energy efficient lighting is cost efficient lighting and LED leads in this category by a significant margin. Compared to linear and compact fluorescent fixtures, which are the most popular lighting options behind LED, LED lighting is around 50 percent more efficient. This number may be a little higher or lower depending on how your fixtures are arranged, but the bottom line is that LED technology can shave thousands off your organization’s operating costs over time.

This efficiency bonus is more pronounced over older lighting technologies like HID and halogens. You can expect to drop more than 80 percent of your lighting costs if switching from HID to LED.

The more often your organization has to replace its lighting components, the more expensive it will be to maintain the system. Targeting lamps with a longer lifespan is one way to extend your system’s performance and LED lighting is also the frontrunner here.

The typical LED lamp will last more than 50,000 hours and may provide 100,000 hours of quality light before it needs to be replaced. That means if left on 24/7, an LED light will last for nearly 10 years at the minimum. Compare this to fluorescent tubes, which only remain functional for three to five years before they need to be replaced. Halogens, HIDs and other older technologies may burn out in a year (or even less).

LEDs are also more durable than other lights and are capable of dealing with rough handling. Unlike other forms of lighting, which use flimsy filaments or fragile gas chambers, LED lights are built on solid state circuitry. There’s no weak spot that could result in early failure. This advantage is notable during installation, where the occasional bump and knock is likely to occur. Because LEDs can deal with a little punishment, they are more likely to perform as long as they are rated. That’s additional cost savings.

LED Lighting Is Easy To Pair With Modern Controls

LED lighting has been designed with modern engineering processes, so it is designed to work with modern lighting controls. With dimmers, you can control the exact amount of illumination the lamp outputs. With occupancy sensors, the lights will switch on as soon as someone is nearby. With a photocell, the lights will switch on and off with the sun’s presence. With timers, you tell the LEDs when to operate and when to shut off.

All of this is simple to do with LED’s solid state engineering. It’s not as simple with fluorescent or halogen technology, so LEDs are the choice if controllability is a concern.

LEDs Can Also Be Paired With Existing Fixtures During A Retrofit

LED fixtures have come a long way in a decade. It wasn’t too long ago that installing LEDs meant ripping out the old system and replacing it with something completely new. That was expensive, but it’s no longer the only choice. Now many LED fixtures are designed specifically for retrofit applications and are compatible with most existing lighting systems. Retrofits are possible in most facilities and are a quick, less expensive way to get the benefits of LED without the upfront cost of a new system.

Much of the discussion around LEDs focuses on efficiency and longevity, but the illumination that LED lights produce is also impressive. LED fixtures output high quality, high clarity light that appears brighter and more neutral than HID or incandescent. Also, while LEDs once lagged behind other lights in their ability to render color, that’s not the case anymore. High-CRI LED fixtures are available and are ideal for either exterior or interior applications. Inside, high-CRI lamps can faithfully represent colors in clothing and artwork. Outside, high-CRI LEDs can help people see better at night, or they can be paired with security cameras for better imaging.

Aim Light Where You Need It With LED’s Directionality

Most lamps emit illumination omnidirectionally. That means they cast light in all directions at once. This can be of benefit in some settings, but it frequently results in a lot of light that’s wasted on the ceiling and low priority surfaces.

LED lamps are directional due to their engineering and can be aimed with precision. There are a couple of benefits to this. One, more light is directed to where it is needed which improves performance and efficiency. Two, LEDs can be targeted at a particular object or area, which can be used in display and security applications.

The Future And Present Of Lighting Is LED

With clear advantages in efficiency, longevity, performance and versatility, LED lighting is poised to dominate the market for the foreseeable future. That’s great news for organizations looking to make the switch to solid state lighting. Like with most technologies that have come before, economies of scale are driving down the cost of LED lights and driving up the quality of engineering. The result is a lighting technology that is across-the-board better than its competitors.