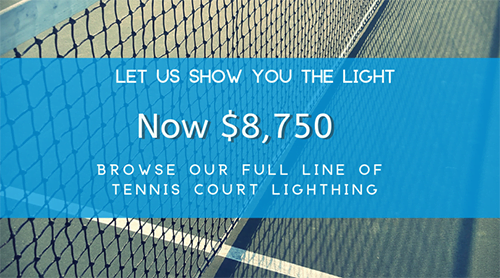 There aren’t too many options for tennis court lighting because it’s tough to find a set of fixtures that are both powerful enough to provide visibility, and within the necessary color temperature range. For decades, metal halides have been the standard for this approach, but it’s losing its grip in the industry to a technology that offers superior efficiency and reliability. LED fixtures have, in the last several years, gone from an interesting, but flawed, technology to a realistic option for a variety of applications. This includes sports arena projects, where LED technology can make a major impact in aesthetics and cost effectiveness.

In general, professionals will look to retrofit LEDs over existing “cans,” which is another term for fixtures. These cans are mounted on poles 20 to 30 feet high, and the height of the pole will affect what fixture model the design crew will use. If the court is newly built, an experienced designer can install a new set of poles and LED fixtures.

There a couple goals when setting up tennis court lighting. They include:

Lighting designers rely on sophisticated photometric modeling software to map out where fixtures should be placed. During photometric analysis, the court is laid out on a grid, usually segmented in increments of a few feet. As fixtures are added and moved in the model, the software calculates the lumen or foot candle level in each space, giving designers a clear picture of how the lights will perform following installation. For this reason, photometric analysis is strongly recommended for any large scale lighting project, and not just tennis court projects.

That said, a standard lighting package for a 60×120 court is eight cans, evenly spaced and with four on each side. With modern LED luminaries, this will produce even, bright illumination that does not emit considerable glare and does not leave any shadows behind.

The Decline of Metal Halides

This eight can arrangement has long been the standard, and it has been used with metal halides for a long time. So, why should an arena consider a move to LEDs? The case is overwhelmingly in favor of LED fixtures, and includes:

Tennis courts don’t have to be shut down when the sun goes down. With high quality LED fixtures, the owner can keep the lights running and the play continuing for a fraction of the operating cost of metal halides.