It’s not easy shooting hoops in the dark, but it’s also not easy finding a basketball court lighting system that will provide your court with enough illumination. The solution for most facilities is to work with a lighting expert – one who has experience with basketball courts. Why does that experience matter?

Most basketball courts are built with standardized dimensions, so a single lighting system can be designed for the vast majority of courts out there. A lighting installer with basketball court experience is familiar with the relevant photometrics, so they’re the best option when designing and installing a new system. Because they know how light behaves on the court, they know how to minimize glare and optimize light levels.

What Does A Basketball Court Lighting System Include?

The goal of a basketball court lighting system is even, high output. To achieve that, you’ll need quality LED lighting that’s optimally positioned. We’ve put together basketball lighting packages that satisfy those needs and include the following:

That’s for a full basketball court. For halfcourt lighting, a pair of poles and fixtures is sufficient. In both cases, each light fixture is mounted at a height using LED sources with a type III lighting pattern. Type III lighting needs to be placed to the side of the area, allowing the light to project outward and fill the area, producing a filling light flow. Instead of lighting the wall behind them, type III LEDs produce light where it’s needed most – on the court.

Five Reasons To Consider LED Lights For Your Basketball Courts

There are a number of reasons for this change. Five of them include: 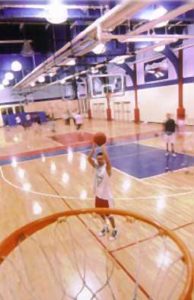 Controllability is a big advantage for LEDs, as facilities can unlock unmatched efficiency from their lighting solutions with advanced controls. Some control options include timers, emergency backup switching, and occupancy sensors.

For example, occupancy sensors detect when someone enters the gymnasium, and they switch the lights on in response. Occupancy sensors may detect IR (heat) signatures or motion, and many combine the two to make for a better sensor. There are also photocells, which are useful with outdoor basketball courts. Photocells detect the level of ambient light, so when night falls, they automatically switch on the lights. Once the sun comes back up, the photocells switch the lights off.

LED Spot specializes in lighting and installation. We know what LED fixtures to use, what light poles to install, and where to place each fixture.

We’ve also done the photometric modeling, specifically for basketball courts. That means our team is equipped to help your team get the light it needs to dribble, pass, shoot, rebound and hoop better.