Commercial lighting has a long, extensive history that spans centuries, and one could certainly argue about where that history should officially begin.

For most historians, Thomas Edison is considered the father of commercial lighting, as his invention of the light bulb made it possible to mass produce electrical lighting for larger spaces. However, many inventions came before Edison’s, and many improvements have been made since his revolutionary creation. The story of commercial lighting is still being written, with exciting developments in LEDs leading the way. But let’s turn the pages back to 1802, when the electrical light first became a realistic concept.

Before Edison
Humphry Davy, a man that doesn’t get much mention in U.S. history books, was the first person to invent a way to reliably produce light from an electrical source. His invention was known as the electrical arc lamp, and he crafted it while also inventing the electrical battery, both of which were first introduced to the world in 1802. Davy was a master of chemistry and a member of the English Royal Society, one of the earliest scientific organizations in the world. During one of its meetings, Davy demonstrated his lamp, and it was impressive to behold. Far brighter than candlelight, Davy’s early arc lamp was too bright and too short-lived to be of practical use, but it set the stage for future iterations of the technology.

A flood of primitive light bulbs were invented over the next several decades, and though each version got a little closer to an effective commercial fixture, they still fell short for one reason or another. Among these designs, Warren de la Rue’s 1840 version, Joseph Wilson Swan’s 1850 iteration and Henry Woodward’s and Mathew Evans’ 1874 design merit special mention.

British scientist Warren de la Rue built his light bulb using a platinum filament that was coiled inside a vacuum tube. De la Rue’s thinking was that the platinum’s higher melting point would allow it to withstand additional power, and that the vacuum inside the bulb would mean fewer gas molecules to generate heat. It was an effective design, but it was extremely costly, given the rarity of platinum at the time.

Joseph Wilson Swan also placed his filament in a vacuum tube, but instead of platinum he used paper filaments that were carbonized. In 1860, Swan managed to produce a functional prototype, but it wasn’t until the 1870s that he was able to reliably produce the needed vacuum, using the newly introduced vacuum tubes. His final version was invented in 1878, a year before Edison patented his bulb, and it used treated cotton thread.

Henry Woodward and Mathew Evans were medical electricians living in Toronto when they filed a Canadian patent for their carbon rod lamps. This was in 1874, and their lamp was designed with carbon rods of varying sizes, placed in a nitrogen-filled glass cylinder along with a pair of electrodes. Woodward and Evans were able to get an impressive amount of light from their design, but they failed at creating a commercial version. Eventually, they called it quits and sold their patent to a one Mr. Thomas Edison.

Edison’s first patent was filed in 1878 under the label “Improvement in Electric Lights.” By then, Edison had a simple incandescent bulb using a metal filament to emit light. In 1879, Edison submitted another patent to the U.S. Patent Office, this time with a design that included a coiled carbon strip that was fixed to platina wires. Edison kept working at his design, though, eager to be the first inventor to create practical electrical lighting for commercial clients.

Fortunately, he didn’t have to wait long after his 1879 design update. Just a few months after he submitted his 1879 patent, he and his team made the critical discovery – that with a carbonized bamboo filament, it was possible to produce more than 1,200 hours of light. This major finding is where most historians place the genesis of commercial lighting, as Edison began marketing and manufacturing this version of his light bulb to commercial clients by 1880.

Let There Be Light

Edison’s invention, obviously, had an enormous impact on commercial and municipal lighting, and Edison acted fast to ensure his company, the Edison Illuminating Company, took full advantage of its asset. Just two years after his 1880 design was revealed to the world, he built the first central power plant in the U.S. on Pearl St. in Manhattan. When it first began operation in September 1882, the Pearl St. Station only supplied power to 400 lamps, but by 1884, this number climbed to 10,164 lamps. The station was also notable for being the world’s first cogeneration plant, as Edison sold the steam used to power the plant’s turbines to nearby clients, who used it to warm their homes.

The Edison Illumination Company suffered a major setback, though, in 1890 when the Pearl St. Station burned down, destroying everything but a single dynamo.

By then, though, commercial lighting was no longer under the solitary purview of Edison, and many others were working on improving it.

Into the 20th Century

From 1880 to 1900, there were several significant advancements in lighting technology. For example, General Electric produced the first enclosed carbon arc lamp for commercial clients, and it was notable for lasting 10 times longer than previous designs. And in that same year, 1893, Nikola Tesla stunned the world by demonstrating the possibility of wireless electricity, which he used to light a Geissler tube. Though his ideas never caught on in the mainstream, Tesla’s findings were held in high regard among other inventors for decades, and are still discussed among modern electrical engineers.

The next big step in commercial lighting came in 1901, when Peter Cooper Hewitt introduced the mercury-vapor lamp. Perhaps the first gas discharge lamp to meet commercial success, the mercury-vapor lamp was, and is, more efficient than incandescent fixtures, making it a standard choice for cities looking for a way to light their streets. Gas discharge lamps are still a frequent choice for parking lot and street lighting today, though they are losing ground to more advanced options.

In 1910, Georges Claude demonstrated neon lighting at the Paris Motor Show. Claude’s design remains largely unchanged, though at the time, Claude was only capable of creating crimson red light with his neon fixtures. By the 1950s, neon lighting was available in a rainbow of colors, produced by adding argon to the neon and coating the tubes with fluorescent materials. Neon lighting was even used in residential settings in Europe, but in the U.S., it was mainly confined to commercial use. 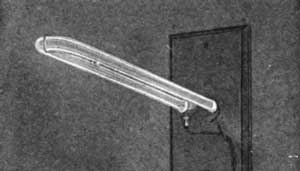 Arguably the biggest step for commercial lighting since Edison’s heyday came in 1926, when Edmund Germer submitted his patent for the first fluorescent lamp. Fluorescent lamps work by sending an electrical current through a tube that contains mercury vapor. When switched on, the current excites the mercury vapor, making it produce a particular wavelength of ultraviolet light. This light activates a phosphor coating on the inside of the tube, converting the UV light into a wavelength that people can see.

However, there was plenty of room for improvement on the design. And in 1980, Philips released its SL model of the compact fluorescent lamp, or CFL. Although several CFL designs had been put forth, including one from General Electric, Philips was able to capitalize on the commercial version of the CFL, which could last up to 25 times longer than traditional fluorescent tubes, and expend about 80 percent less energy in the process.

Anyone who has worked in an office, grocery store or large department store is familiar with the green-blue hue of the fluorescent tube, as it is still in widespread use today in commercial buildings. 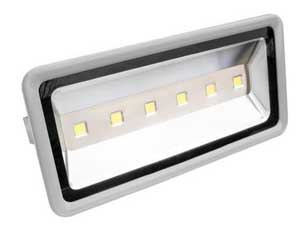 Light-emitting diodes, or LEDs, were a byproduct of the race to produce semiconductors. Several companies were zeroing in on various semiconductors for lasers and power applications, including General Electric, Texas Instruments and Bell Labs. In 1961, the LED was invented as a result of this rush for semiconductors, and invented by a pair of engineers – James Biard and Gary Pittman. Their version of the LED did not produce visible light, but when placed in the presence of an infrared detector, it was clear that the diode was indeed generating light.

Even with all of these advancements, though, LEDs would not be practical for commercial use for decades. Their cost of manufacturing and lack of brightness made them little more than a novelty until the 1990s. At this point, the cost of manufacturing had dropped enough to make LEDs commercially viable in some settings, though they were still not ready for large scale commercial lighting.

That wouldn’t happen until 2006, when improved cost, longevity, color rendering and output made LEDs a competitive option against fluorescent and incandescent fixtures. Every year following 2006, the sale of LED lighting grew radically. In fact, in just one year, from 2011 to 2012, the sale of replacement LED bulbs expanded by 22 percent globally. And the cost of an LED equivalent to a 60-watt incandescent bulb fell by almost 40 percent.

LEDs are quickly replacing all other lighting technologies in various settings, including parking lot lighting, commercial lighting and even in residential applications. Their unmatched efficiency and longevity keeps their operational costs low, and their zero heat production is making them a viable option for delicate applications like displaying artwork. As LEDs continue to improve across the board and drop in cost, they will likely become the dominant form of lighting in nearly all commercial settings.

Commercial lighting has come a long way since the days of Edison and his revolutionary glass bulb. But more revolutions are in store, with engineers harnessing the potential of LEDs and designers finding more and more utility in the technology.