Making big changes to an aging lighting system can produce big gains for a business, and for owners wondering how to reduce their electric bill, it’s a no brainer. Lighting is something that property owners tend to take for granted, but it shouldn’t be, because it is one of the principal sources of a business’s energy consumption. And the older the system, the more likely it is wasting power. With the rise of LED technology, there is a clear path to major energy savings, along with some other smart additions, like improved lighting controls.

How can a focus on lighting help reduce an electric bill? 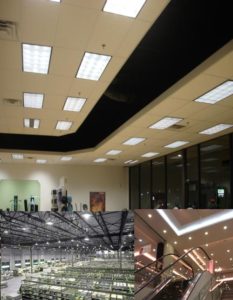 There are hundreds of improvements, large and small, that a company can take to cut their energy waste. The single biggest improvement, though, usually comes in the form of lighting. Any system that is at least 10 years old is likely far behind the curve in energy efficiency, as LED fixtures have emerged as a competitive option in most commercial markets recently. How should a property owner go about upgrading their lighting, though? Consider these tweaks:

The running theme here is technology. By taking advantage of recent gains in lighting technology, a property owner can set their business up for major energy savings for years to come.