How Can We Help You Today?
(281) 972-5006
Where Lighting Ideas Turn Into Real Lighting Solutions!
Login Register
MENUMENU
LED SpotCommercial LightingWhen are Fluorescent Lights Being Discontinued? 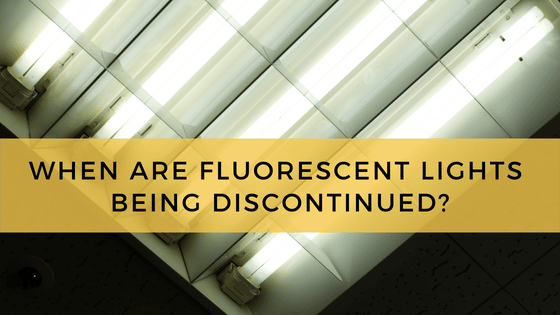 For years, local, state, and national governments have placed additional regulations on the lighting industry and its products. This process continues pace, and while in the past these regulations were aimed at incandescent and halogen lamps, now fluorescent lighting is in the crosshairs.

For nearly a century, fluorescent light bulbs were the undisputed leaders in energy efficiency. This was true when CFLs were introduced in 1976, and it was still true when LED lighting was just being introduced by manufacturers.

That’s no longer the case, though. Modern LED fixtures have passed fluorescents in terms of energy efficiency, along with safety, maintenance costs and lighting quality. With these facts in mind, some governments are limiting, or outright banning, the manufacturing of some fluorescent lamps.

What Types of Fluorescent Lighting are Being Targeted for Discontinuation?

At the national level, the Department of Energy (DOE) is responsible for lighting regulations. In 2009, it announced a phaseout of T12 fluorescent tubes. According to the DOE, after July 14, 2012, T12 fluorescent tubes could no longer be manufactured, though manufacturers could exhaust their existing material stock to manufacture T12s before discontinuing them permanently.

However, there were some exceptions to the rules. Major manufacturers like Phillips were given an extension on the ban, but the DOE’s objective has been met. As soon as the DOE’s intention to ban T12s was clear, production plummeted. If your facilities rely on T12 fluorescents, you’ve likely had difficulty sourcing lamps or T12-related accessories, like ballasts.

A notable exception in the DOE’s regulation was high-CRI fluorescent lighting, specifically lamps with a CRI rating of 87 or higher. This exception buoyed the production of T12s for a while, but several states have already passed their own laws banning the sale or manufacturing of high-CRI linear fluorescent lighting. This essentially bans all T12s from those states, which include:

Some T8 tubes are also considered high-CRI lamps and would therefore fall under these bans as well.

Why are States and National Governments Considering a Ban on Some Fluorescent Tubes?

Fluorescent tubes are available in a variety of sizes, denoted by the number following the “T.” The largest among them, by diameter, is the T12. T12 tubes are 1.5 inches in diameter, and their larger size means they must rely on electromagnetic induction to generate light. This is inherently less energy efficient (T12s require about 40 watts per hour to operate) than the more sophisticated circuitry built into T8s and T5s. A typical T8 tube, for example, requires between 25 and 30 watts an hour to run.

The DOE’s T12 phaseout was predicated on the T12’s poor energy efficiency, but there are other reasons why there is momentum behind a T12 ban. For example:

What Lighting Alternatives are Available for Consumers and Companies?

The fluorescent phaseout is underway and will likely continue as long as even more efficient alternatives like LEDs gain market momentum. While T8 and T5 tubes aren’t targeted by the DOE’s 2009 Act, some T8s are already limited by high-CRI linear fluorescent lighting bans.

Facility operators and lighting experts can see which way the industry is headed. LED lighting has come a long way since it was introduced decades ago, and it’s quickly being adapted for a variety of lighting applications. LED lamps and bulbs offer several benefits compared to older lighting technologies, including:

Many home and business owners are choosing LED retrofit kits to replace their existing fluorescent lighting. These kits bypass existing ballasts and snap in LED linear strips so that the fixture will be completely LED. This is a great economical solution, saving on kilowatts and requiring little maintenance.

If you’re considering the same for your property, work with a company that has a comprehensive selection of LED lighting products available, including LED retrofit options that can be quickly installed with your existing lighting infrastructure. Not only is LED lighting the energy efficient choice, it’s also quickly becoming a convenient one as well.