How Can We Help You Today?
(281) 972-5006
Where Lighting Ideas Turn Into Real Lighting Solutions!
Login Register
MENUMENU
LED SpotCommercial LightingWhat Fixtures Are Used For Lighting A Warehouse? 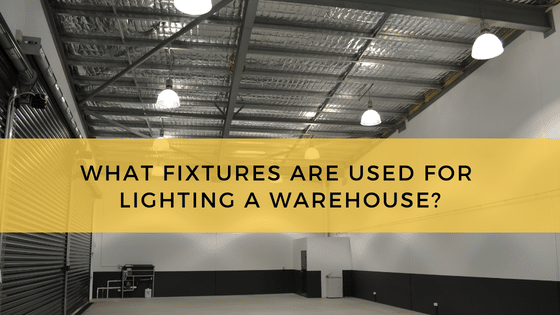 Warehouses are a challenge to light due to their size and because of the activity inside. Warehouses are busy places where workers are frequently engaged in high-risk tasks. To ensure they can do their jobs safely, you’ll need a high-output lighting system that renders color well and provides even coverage.

Most warehouses feature extremely high ceilings, ranging up to 40 feet or more. In spaces like these, where verticality is the defining feature, high and low bay fixtures are the standard.

In the lighting industry, the word “bay” refers to illuminating a large space. That means they’re designed for a large area like a warehouse.

There’s only a couple of differences between low and high bay fixtures. They are:

You’ve got plenty of flexibility in mounting bays. They can be mounted directly to the ceiling or suspended at varying heights. This gives facility managers layout flexibility when setting up the bays.

There are also bay lights sealed against water and solid intrusion. They’re ideal for warehouses where high dust and humidity levels are common, and feature IP65 ratings or better. Further, bay fixtures come with anti-glare features that improve comfort and visibility at ground level.

Bay Fixtures Are Available In Linear Or UFO Designs

The other major difference between bay designs is shape. Bay lighting products are available in linear or UFO designs, and both are common options for warehouse applications. Here’s a quick look at each:

The Problems With HID Lighting

HID lighting was the warehouse lighting technology of choice for a long time. HID bulbs output a lot of illumination, making them one of the best options for lighting outdoor areas or a large indoor space.

However, this high output comes at a cost. Specifically, high energy costs. HID fixtures like metal halides and high-pressure sodium lamps require a lot of power to function. At the source, metal halides aren’t too bad, though they’re still behind LED light bulbs in source efficiency.

It’s at the system level where metal halides waste a lot of electricity. That’s because of how a metal halide fixture emits light. Metal halides emit omnidirectionally, so a lot of their output never reaches the floor level where it’s needed most. They emit a lot of light, but much of it never reaches the intended target. Reflectors can mitigate this to some extent, but they’re heavy, expensive, and still not as effective as LED fixtures.

HID lighting tends to degrade quickly, too, and you can expect the typical metal halide to fail around 10,000 hours. Many will need to be replaced early because metal halides tend to decline in color rendering or output as they age.

Four Reasons Why LED Lighting Is Ideal For Illuminating Warehouses

LED is quickly emerging as the first choice in warehouse and bay lighting. LEDs come with several advantages over other lighting technologies, four of them including:

Whether you’re updating an existing system or preparing a system for new construction, we’re the experts to call.