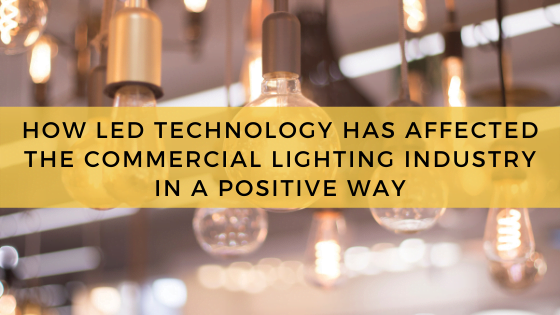 It’s not often that something comes along and transforms the lighting industry, but that’s exactly what LED technology is doing. LEDs have been around for more than a half century, but not many foresaw the impact they would eventually have on lighting. The first person to recognize that LEDs had a future in the industry was Nick Holonyak, the engineer that invented the red LED in 1962. His prediction was considered maverick at the time, but 50 years later, the technology can be found just about everywhere.

Lighting is a primary source of energy drain in the business world, so any step forward in efficiency and reliability is an important one. In this way, LED technology is poised to be the most revolutionary development in the field since the production of fluorescent lighting.

How has LED technology affected the commercial lighting industry in a positive way?

There are almost too many answers to count. The truth is, most lighting technology is unsophisticated. Incandescent produces light by running an electrical current through a filament, which causes it to glow as it heats up. Fluorescent technology works by sending an electrical current through a gas mixture, exciting it and causing it to produce fluorescence, with the help of a phosphor coating. Most other fixtures are variations on these themes, like halogen and sodium vapor lamps.

LEDs are entirely different. Exciting gas or heating a filament wastes a great deal of energy, as neither are efficient processes. LEDs, though, operate using modern semiconductor technology. Semiconductors function at the atomic level, exchanging electrons and harvesting the energy that is released as a result. It’s easy to see how this process offers superior controllability and efficiency. And most of the issues that once held LEDs back have either been solved or are well on their way.

But how has an emerging focus on LEDs helped out business owners? This is how the technology has made a difference:

There is no doubt that LEDs are the future of commercial lighting. Every day, more and more business owners make the switch to LED technology. With its impressive resumé, there is no better alternative.