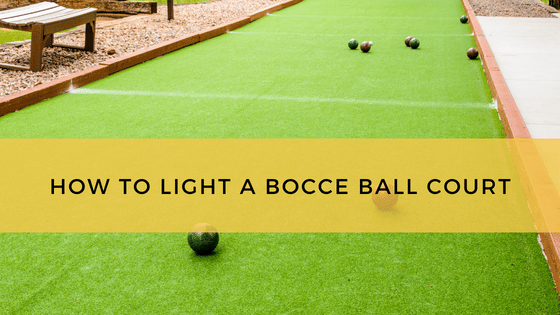 Bocce ball is an old game, with roots dating back to the Roman Empire. First popularized in Italy, the sport is now loved world-wide to the point where many avid players have installed bocce courts in their backyards. While bocce court installation is simple and straightforward what’s more of a challenge is properly lighting the bocce ball court surface. Whether the court is at a home or a public spot bocce ball courts aren’t usable at night unless there is enough illumination to see and safely play by.

A bocce ball field is rectangular stretching out to just shy of 90 feet long for official play. That may be too long for some areas which is why many choose to reduce the court’s length to 60 or 72 feet. Width wise you’ll need between 10 and 13 feet to have enough room to play.

Beyond that you have options when it comes to court design. For example, your court may be dug out of the ground or installed slightly above it. Keeping height at a minimum and carving out a small area around the court will give people room to gather and socialize. For this reason it’s common for bocce ball courts to feature concrete pavers around the court’s perimeter.

Integrate the Lighting Into The Bocce Ball Court’s Design

If you are a business with an indoor court consider lighting placement from the outset as it’s easier to integrate it directly into the court. Recessed downlights are a popular option as they can be installed right above the court’s surface and therefore direct more light to it. Recessed LED fixtures are available that can be installed in wood or concrete, and they work best when spaced between six and 10 feet apart.

If your court has already been placed, or if you don’t want to fuss with integrated lighting you can get plenty of illumination with poles or bollards. Each pole only sits a few feet off the ground, with an LED fixture mounted at the top of each.

The light poles themselves are typically made from corrosion-resistant steel or aluminum so they’re protected against the weather. The mounted LED fixture is aimed downward to prevent glare and to maximize lighting efficiency at court level. Since these LEDs are a bit more elevated the lights may need to output additional light to make up for the distance. Alternatively, optics that widen the beam’s angle can spread light further and prevent excess contrast between light and dark.

Bollards are similar to poles in that they’re mounted a foot or two off the ground. They’re named after the bollard posts you’ll see at a dock or along roadways, so they’re wider in design than a slim-necked post.

If you don’t mind carving out a little more room bollards can be matched for any court design. That’s because they come in a massive variety of designs and aesthetics, so there’s a bollard for every court. Some are completely transparent while others only contain small transparent panels that illumination can cast through.

No matter their appearance, bollards typically sit a couple feet off the ground. Some bollards are directional, while others emit in an omnidirectional pattern that makes them a better choice for larger entertaining spaces.

Why LED Fixtures Are Ideal for Bocce Ball Court Lighting

Whether your bocce lights are integrated into the court or installed above it, LED is the first choice in bocce ball court fixtures. There are a few reasons for this, including:

When selecting a fixture, it’s not just about operating cost or fixture price. It’s also about whether the fixture looks the way you want it to. That means considering color temperature and rendering.

Color rendering is different. It refers to how well a fixture represents color accurately, and it’s measured using the color rendering index (CRI). High-CRI fixtures (typically rated 90 or higher) are good at presenting colors in their true hue, which enhances visibility at night. If you use colored bocce balls for each team high-CRI lights will make it easier to play after sundown.

Bocce ball is gaining in popularity, and if you or your clients like to bocce at night, you’ll need the right fixtures to play with. Our expert LED lighting team can help pick out and source the fixtures for the ideal bocce ball project.