How Can We Help You Today?
(281) 972-5006
Where Lighting Ideas Turn Into Real Lighting Solutions!
Login Register
MENUMENU
LED SpotCommercial LightingHow LED Lights Can Be Used To Retrofit Commercial Properties 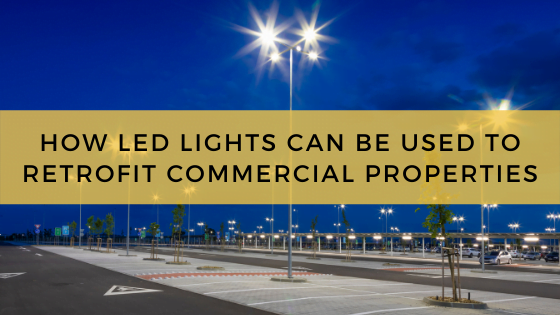 LED lighting retrofits are gathering steam, with facilities large and small considering them for an impressive array of applications. There are plenty of reasons why, most of them obvious, but some of them not. Of course it’s not enough to just screw in a bunch of LED bulbs. Transitioning from one lighting technology to another is no small task, so companies should partner with a lighting expert and designer that they trust to make the right calls.

Shedding Light on the Benefits of Retrofitting with LEDs

LED lighting has been a focus of research and development for decades and those years of study and engineering have led to breakthrough after breakthrough. In just a few decades, LED lighting has gone from a promising curiosity to an industry dominator, taking over segment after segment. No longer hampered by output quality issues, LED technology can be scaled up or down for seemingly any purpose. LED installations are in use in several professional sports stadiums, warehouses, office buildings, restaurants and more.

Eventually most commercial facilities will make the transition to LED, but when to do so is the question. Fortunately there are some telltale signs that suggest a move to LED is the right one.

1. Utility or maintenance costs are out of control – That doesn’t necessarily mean “out of control expensive,” though it can be that too. Although lighting represents a major component of a company’s energy and maintenance costs, many businesses don’t keep a close eye on it. This includes everything from mom and pop shops to towering mega corporations.

If it seems like those costs are too high, too volatile, or just inexplicable, then trading off an aging system for LED could very well be the way to go. LED lighting is extremely consistent and reliable, not to mention extremely efficient. That helps on the utility cost side of things, but because it is engineered using modern solid-state circuitry and sophisticated semiconductor technology LED systems are inherently durable. As such, each LED lamp can give years of performance before its quality begins to degrade, and that’s if the light is left on around the clock. Companies with an older lighting system spend a lot on burnouts. LED is as close as it gets to maintenance-free for five to 10 years after installation.

2. The ROI is just too good to pass up – This follows from the previous point, as LED’s ability to produce excellent ROI is due to its incredible efficiency. There are some applications where the difference in efficiency between an existing system and one powered by LED technology is so distinct that a switch to LED is an obvious smart move.

Parking lot lighting, for example, is quickly phasing out the metal halide and high-pressure sodium lamps and embracing the LED revolution. Here the extremely quick ROI is due to the massive difference in efficiency between metal halides (or pressurized sodium) and LED as well as the reduced maintenance costs. It takes a lot of labor to switch out parking lot lights. The same is true of high-ceilinged industrial facilities or department stores, so LED often makes sense in those situations as well.

3. Safety is a top priority – An LED retrofit brings clear economic benefits to a business, but the safety factor cannot be overlooked. Quality LED fixtures (and quality is the key word here) can be aimed and arranged for optimal visibility usually much more easily than other forms of commercial lighting can. LED lighting also combines that strong coverage with excellent color rendering so it shows colors in their true hue.

Even bright coverage has obvious safety implications in that LEDs eliminate the shadowy areas that reduce visibility. That is clearly important when lighting a parking lot or any facility where machinery is present.

Proper color rendering is also heavily implicated for safety reasons. When a forklift driver is navigating through a warehouse, for instance, they need to be able to precisely pick out colors from a distance. Doing so ensures they do not collide with anyone or anything, and it helps them do their job better as they can read labels from further away.

4. If it’s time to brand better – LEDs perform well in many applications, and signage is one of them. When businesses decide to shift to LED technology signage is typically one of the first pressure points to target, as LEDs hold their lighting quality and brightness for a long time and can be customized to emit almost any color.

But branding goes beyond the obvious messaging. LEDs have a markedly reduced impact on the environment as they do not contain hazardous mercury or phosphors. If a business prides itself on environmental stewardship, it’s easy to sell that message by transitioning to an eco-friendly lighting option.

5. It’s time to do away with existing lighting – Eventually all lighting systems fail. But long before they fail outright they suffer from reduced output or reliability. They waste more and more energy. They start emitting more heat or require constant maintenance. Those are signs that new lighting infrastructure is necessary.

In most cases it’s best to overhaul existing lighting as soon as those signs start showing up. If some fixtures are failing then it won’t be long before others do as well, and it’s not a good idea to mix and match lighting even if that was easily possible.

And if the facility is new construction, then opt for LED from the outset. New construction or renovation is an ideal environment for retrofitting LEDs, as it takes less time and less labor, and there is no downtime attached to the process.

Retrofitting with LEDs is a viable option for many businesses, and eventually it will be a viable option for nearly every business. The march of LED technology is unstoppable, and there’s no reason why business owners shouldn’t at least consider it. This is particularly true when the building in undergoing significant construction. And as long as an experienced LED lighting expert is overseeing fixture selection and installation a new LED system can provide immediate improvements across the board.