Parking garage lights have a much more important job than most other fixtures, in that they are a critical layer of safety in areas that are typically at risk for crime. According to the Bureau of Justice, more than 10 percent of all property crimes and nearly eight percent of all violent crimes occur in parking lots. By the raw numbers, that adds up to about 2.5 million crime events. With substandard illumination, a car park is practically inviting criminal behavior. And liability for such crime may fall to the car park’s owner if their building does not meet OSHA standards for illumination. The goal, then, is to find fixtures that can provide a lot of output without wasting a lot of energy. In this regard, LED fixtures are the top option. 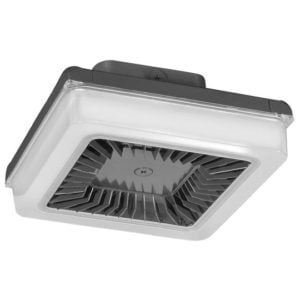 While traditionally, carparks have been illuminated with high intensity discharge lamps or linear fluorescents, LED fixtures are gaining ground in this market. The reasons are numerous and compelling, and they include:

LED fixtures offer the most bang for the buck. Or, in other words, they produce the most lumens per watt. Typically, car parks rely in 150 to 175 watt metal halides, 100 to 150 watt high pressure sodium fixtures or comparable fluorescent fixtures. LED fixtures, though, can offer comparable or superior illumination at 30 to 80 watts, which represents an immediate energy savings.

LED fixtures require much less maintenance and replacing. LEDs can provide between 50,000 and 100,000 hours of continuous performance, and continuous performance is expected from parking garage lights. This is at least several times better than metal halides or high pressure sodium fixtures, and because LED fixtures are generally maintenance free for years after installation, they drive down operating costs much further. Add to this that LEDs can often be mounted closer to the ground, and replacement costs are lower still.

LED fixtures are highly controllable, which is also a factor in safety and economy. LEDs, for instance, offer instant on and off switching, so there is no run up time once the sun goes down. And LEDs are easily dimmed, so during times of reduced occupancy, the system can be run on less power.

LEDs may not seem like the natural option for commercial applications like car parks, but they are already in place in stadiums and warehouses. Clearly, parking lots and garages are well within their capabilities as well.