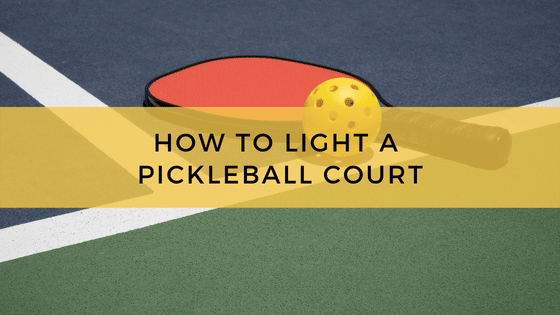 So you’ve decided to dive into the fast-paced, hard-nosed world of pickleball. Well, maybe not hard-nosed, but definitely fast-paced.

Throw tennis, table tennis and badminton in a blender and what you get is a pickleball smoothie. The court has the same general shape and size of a tennis or badminton court, the paddles are similar to what you would use in ping pong (only larger) and the rules are borrowed from several different racquet sports. You can throw whiffleball in there, too, because a pickleball ball has the same weight and hole-filled design.

This hodge-podge of ingredients make for a game that’s quick and easy to learn, but also a little tough to play at night. Like with most sports, the speed is frequently cranked up with pickleball. And when it is, like during a volley, it’s impossible to keep up unless there’s sufficient lighting.

But just because the sun is down doesn’t mean you have to put the paddle down. With quality pickleball court lighting, optimal visibility can be maintained on your pickleball courts.

What Is The General Approach To Lighting A Pickleball Court?

When lighting any sports arena or field, the goal is to get as much of that light down to the field’s level as possible. That’s the goal, but what’s the process?

Whether it’s a pickleball court or a pickle farm, lighting experts use photometric analysis to model the area and determine how light moves through it. Photometric analysis technology is visually sophisticated stuff, allowing designers to see how a set of lights would work before they’re installed. To do that, the designer builds a 3D model of the space and drops fixtures in various spots. Each light is tagged with fixture-specific information, so it emits exactly the same virtually as it would in reality.

USA Pickleball – The sports leading advocate and maintainer of pickleball standards states that the optimal court lighting solution hews to the following standards:

What Does A Pickleball Court Lighting System Include?

During installation, each pole is placed outside the play surface, well beyond the sidelines. They’re organized in a square-like formation, each covering one of the court’s quadrants. It’s exactly what you would think if you were trying to light a rectangle.

The LEDs themselves emit in an offset pattern, so they can sit away from the court while still aiming their illumination at the play area. Extra bonus – our pickleball lights do not emit at viewable angles from the court. In other words, your lights won’t blind the player and leave them exposed to getting pickled by the ball.

So far, there’s been no mention of any other type of light other than LED lighting. There’s a reason for that. LED fixtures have become the first choice for most sports lighting applications, including lighting solutions installed at the professional level.

But even if you’re just installing lights for a neighborhood court, LEDs are still the best available option. Here’s why:

Does Pickleball All Day And Night Sound Good? We Have The Lights You’ll Need To Do That

Pickleball is a mass-appeal sport, attracting people of all ages and fitness levels. So it’s no surprise that there is a growing number of pickleball fanatics honing their gaming skills at all times – including in the middle of the night.

If that sounds like you or someone you know, LED Spot can help you unlock your pickleball potential with nighttime court lighting. Our court lighting products have been implemented in a variety of athletic venues, from parks to stadiums, so we know how to bring light to the pickleball arena for effective play day or night.